MEDITATION and mindfulness: the words conjure images of yoga retreats and Buddhist monks. But perhaps they should evoke a very different picture: a man in a deerstalker, puffing away at a curved pipe, Mr. Sherlock Holmes himself. The world’s greatest fictional detective is someone who knows the value of concentration, of “throwing his brain out of action,” as Dr. Watson puts it. He is the quintessential unitasker in a multitasking world.

More often than not, when a new case is presented, Holmes does nothing more than sit back in his leather chair, close his eyes and put together his long-fingered hands in an attitude that begs silence. He may be the most inactive active detective out there. His approach to thought captures the very thing that cognitive psychologists mean when they say mindfulness.

Though the concept originates in ancient Buddhist, Hindu and Chinese traditions, when it comes to experimental psychology, mindfulness is less about spirituality and more about concentration: the ability to quiet your mind, focus your attention on the present, and dismiss any distractions that come your way. The formulation dates from the work of the psychologist Ellen Langer, who demonstrated in the 1970s that mindful thought could lead to improvements on measures of cognitive function and even vital functions in older adults.

Now we’re learning that the benefits may reach further still, and be more attainable, than Professor Langer could have then imagined. Even in small doses, mindfulness can effect impressive changes in how we feel and think — and it does so at a basic neural level. 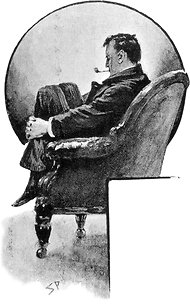 A drawing of Sherlock Holmes by Sidney Paget from 1891 in The Strand Magazine.

In 2011, researchers from the University of Wisconsin demonstrated that daily meditation-like thought could shift frontal brain activity toward a pattern that is associated with what cognitive scientists call positive, approach-oriented emotional states — states that make us more likely to engage the world rather than to withdraw from it.

Participants were instructed to relax with their eyes closed, focus on their breathing, and acknowledge and release any random thoughts that might arise. Then they had the option of receiving nine 30-minute meditation training sessions over the next five weeks. When they were tested a second time, their neural activation patterns had undergone a striking leftward shift in frontal asymmetry — even when their practice and training averaged only 5 to 16 minutes a day.

As little as five minutes a day of intense Holmes-like inactivity, and a happier outlook is yours for the taking — though this particular benefit seems to have been lost on Holmes himself, what with his bouts of melancholy and his flirtations with a certain 7 percent solution. A quick survey will show that the paradox is illusory: Holmes is depressed when there is no target for his mental faculties. Give him a project, and balance is restored.

But mindfulness goes beyond improving emotion regulation. An exercise in mindfulness can also help with that plague of modern existence: multitasking. Of course, we would like to believe that our attention is infinite, but it isn’t. Multitasking is a persistent myth. What we really do is shift our attention rapidly from task to task. Two bad things happen as a result. We don’t devote as much attention to any one thing, and we sacrifice the quality of our attention. When we are mindful, some of that attentional flightiness disappears as if of its own accord.

In 2012, researchers led by a team from the University of Washington examined the effects of meditation training on multitasking in a real-world setting. They asked a group of human resources professionals to engage in the type of simultaneous planning they did habitually. Each participant was placed in a one-person office, with a laptop and a phone, and asked to complete several typical tasks: schedule meetings for multiple attendees, locate free conference rooms, write a memo that proposed a creative agenda item and the like. The information necessary to complete those tasks? Delivered as it otherwise would be: by e-mail, through instant messages, over the phone and in person. The list was supposed to be completed in 20 minutes or less.

After the multitasking free-for-all, participants were divided into three groups: one was assigned to an eight-week meditation course (two hours of instruction, weekly); another group didn’t take the course at first, but took it later; and the last group took an eight-week course in body relaxation. Everyone was put through a second round of frenzy.

The only participants to show improvement were those who had received the mindfulness training. Not only did they report fewer negative emotions at the end of the assignment, but their ability to concentrate improved significantly. They could stay on task longer and they switched between tasks less frequently. While the overall time they devoted to the assignment didn’t differ much from that of other groups, they spent it more efficiently. They engaged, on average, in just over 40 discreet “tasks” — test-related behaviors that had a definable start and end time — spending approximately 36 seconds on each, in contrast to the 48 to 50 average tasks attempted by the other groups — with an average of only 30 seconds spent per activity. They also remembered what they did better than the other participants in the study.

The concentration benefits of mindfulness training aren’t just behavioral; they’re physical. In recent years, mindfulness has been shown to improve connectivity inside our brain’s attentional networks, as well as between attentional and medial frontal regions — changes that save us from distraction. Mindfulness, in other words, helps our attention networks communicate better and with fewer interruptions than they otherwise would.

In a 2012 study at Emory University, increased meditation practice was associated with enhanced connectivity between the dorsolateral prefrontal cortex, a part of the brain involved in attention monitoring and working memory, and the right insula, an area that is associated with how well we can monitor our own feelings and thoughts and that is considered a key waypoint between our two major attention networks, the default and the executive.

Not only could this increased connectivity make us better able to switch between tasks and monitor our own attention, but it is indicative of more effective overall management of our finite attentional resources.

Mindfulness training has even been shown to affect the brain’s default network — the network of connections that remains active when we are in a so-called resting state — with regular meditators exhibiting increased resting-state functional connectivity and increased connectivity generally. After a dose of mindfulness, the default network has greater consistent access to information about our internal states and an enhanced ability to monitor the surrounding environment.

These effects make sense: the core of mindfulness is the ability to pay attention. That’s exactly what Holmes does when he taps together the tips of his fingers, or exhales a fine cloud of smoke. He is centering his attention on a single element. And somehow, despite the seeming pause in activity, he emerges, time and time again, far ahead of his energetic colleagues. In the time it takes old detective Mac to traipse around all those country towns in search of a missing bicyclist in “The Valley of Fear,” Holmes solves the entire crime without leaving the room where the murder occurred. That’s the thing about mindfulness. It seems to slow you down, but it actually gives you the resources you need to speed up your thinking.

The difference between a Holmes and a Watson is, essentially, one of practice. Attention is finite, it’s true — but it is also trainable. Through modifying our practices of thought toward a more Holmes-like concentration, we can build up neural real estate that is better able to deal with the variegated demands of the endlessly multitasking, infinitely connected modern world. And even if we’ve never attempted mindfulness in the past, we might be surprised at how quickly the benefits become noticeable.

Until recently, our 20s were considered the point when our brain’s wiring was basically complete. But new evidence suggests that not only can we learn into old age, but the structure of our brains can continue to change and develop. In 2006, a team of psychologists demonstrated that the neural activation patterns of older adults (specifically, activation in the prefrontal cortex), began to resemble those of much younger subjects after just five one-hour training sessions on a task of attentional control. Their brains became more efficient at coordinating multiple tasks — and the benefit transferred to untrained activities, suggesting that it was symptomatic of general improvement.

The implications are tantalizing. Mindfulness may have a prophylactic effect: it can strengthen the areas that are most susceptible to cognitive decline. When we learn to unitask, to think more in line with Holmes’s detached approach, we may be doing more than increasing our observational prowess. We may be investing in a sounder mental future — no matter how old we are.

Maria Konnikova is the author of “Mastermind: How to Think Like Sherlock Holmes” and a doctoral candidate in psychology at Columbia.